*The total playing time of this demo is 90 minutes, representing 3/4s of the show. Several songs are integrated into the scenes.
​We recommend listening to the tracks with ear buds or with good speakers.*
ACT ONE

1. PROLOGUE - Garson & Alice
A magical vocal quartet beckons us into a world where creative desire creates reality as Garson, a musical theatre composer, asks us if we've ever longed to live in another time. Alice, his collaborator and sometimes lover, rushes in to Grand Central Station to meet him for her celebratory birthday lunch on the Super Chief dining car restaurant, a new hot spot, recreated on a track at the station.
​2. GOIN' HOLLYWOOD - Garson, Alice, Company
Upon learning that the show option they were counting on is not moving forward,
Alice blows out the candles on her birthday cake while making an impassioned wish that if they could go back in time to the Golden Age of Hollywood, 1949, they would flourish. The lights magically change, and incredibly, the dining car is actually moving, and they are amazed to find that her wish was granted. The waiter, now transformed into a train conductor, presents them with round trip tickets good only for one year. They arrive at Union Station, Hollywood, where their song, GOIN' HOLLYWOOD, is a big production number where 'everyone knows their song!'.
​
3. TAP IT OUT - A.J., Garson, Alice, The Writers, Nancy, The Mail Girls
Alice and Garson meet A.J. Engerman, head writer at MGM, who is intrigued enough to hire them.
​They meet the quirky team of writers, and Nancy, an ardently socialist MGM mail girl who takes a shine to Garson, and they are clued in to how things work at MGM.
​
4. NAMING NAMES - Alice & The Wonderlads
Wangling an invitation to one of Gene Kelly's parties, Alice and Garson compose a tour-de-force song to show off their talents to the Hollywood elite, 'Naming Names', a satire about the House UnAmerican Activities Committee and the Communist scare, which was building at that time. With a stylistic nod to the great Kay Thompson and the Williams Brothers, this number is a huge success, but also quite incendiary.
5. TOO SMART - A. J.
AJ congratulates Alice & Garson for their brilliant work, but says they are 'too smart' for Hollywood, and should never write this kind of song again in this dangerous political climate. We learn that he had been a Communist in the 30's and worries that he will be found out.
​
6. ALICE'S SONG - Garson & Alice
At the top of the world, literally, at the Hollywood sign, Garson & Alice celebrate the success of their subversively satirical song about the Hollywood Blacklist, ‘Naming Names’, which they had just performed at Gene Kelly’s star studded party. Garson sings of his love to Alice, and we learn his feelings truly do run deep in ‘Alice’s Song’.
​
7. IN THE BLINK OF AN EYE - A.J., Garson, Alice, and Company
Alice and Garson have a great meeting with L.B. Mayer, who has been told of their success at Gene Kelly's party. He advises them not to write subversive songs like that again, but at the same time gives them an option to write 'The Sewing Girl', which will star a tap-dancing Ann Miller playing Betsy Ross. A.J. is to direct, a huge promotion for him, but he must sign a pledge that he has never been a Communist. Alice convinces him to do it, but at the shoot, he is served with papers to appear before the House UnAmerican Activities Committee and his career is now destroyed. Garson, at the Act One curtain, 'What have we done, Alice?'
​
ACT TWO

8. IT COULDN'T HAPPEN TO A NICER GUY - The Writers
​
Act 2 opens at a screening for 'The Sewing Girl', starring Ann Miller playing a tap-dancing Betsy Ross, which is a monumental bomb. The Writers delight in AJ's failure, as he had stolen the idea from one of them.
​
9. NICER GUY ENCORE - The Writers
The Writers' schadenfreude couldn't be contained in one number. They encore their glee at AJ's huge flop film.
10. YOUR NAME ON THE DOOR -  A. J.
After being named as a Communist and fired, A. J. sees his name being scraped off the door of his office and sings a sad and soulful song about his destroyed life and the hell that he's going through.
​
11. YOU GOTTA ADMIT - Garson & Alice
In spite of everything, Alice and Garson take a moment to marvel at all that's happening to them in 1949.
"You gotta admit it's exciting!"
​
12.  NANCY'S SONG - Nancy
Nancy, the far left leaning mail girl, smitten, tries to forcefully convince Garson that only she has his best interests at heart and that Alice is not at all the one for him.
13. GOWER GULCH - The Wonderlads
As a result of the failure of 'The Sewing Girl', Garson is loaned out to Republic Pictures in 'Gower Gulch', so named for the many Westerns that were filmed on Gower Street. He writes a song, featuring Alice's 'Wonderlads',  but without Alice, who has been promoted to AJ's old job at MGM. It's not going well for either of them.
​
14. THE ONLY WOMAN IN THE ROOM - Alice
Alice, having been promoted to be the first female supervisor of the writers' pool by LB Mayer after AJ was fired because of the Hollywood Blacklist, is thrilled to be 'the only woman in the room', but her illusion of power is shattered by the sexual discrimination she is up against in 1949, a lifetime before #metoo.
​
15. GOOD COMPANY - Alice, Garson, A.J., and Company
Alice convinces Garson, A.J. and the writers that they can fix 'The Sewing Girl' just like Comden and Green did in The Bandwagon (which hadn't been written yet). They brainstorm, get excited about it, and figure out what to do.
​
16. THE LITTLE BOX - Garson
When Garson finds out that AJ has committed suicide as a result of the Blacklist,
his fury emboldens him to interrupt the fabled MGM 25th Anniversary luncheon with a diatribe.
An impassioned warning from the future of how the television explosion is going to make the studio system obsolete.
​
17. ANY TIME - Garson & Alice
LB Mayer has had Alice and Garson investigated to find they have no past and thinks they are Commie spies. Their ticket back to the present, good for a year, is now up and they hot foot it just in time to take the time traveling Super Chief car back to Grand Central Station.  They realize that their true destiny is here and now.
Alice finally realizes that she deeply loves Garson and they both are divinely inspired to begin the next chapter of their lives by writing a new show about what they've just experienced and learned.
18. FINALE - Garson & Alice
Garson and Alice's adventure into the past gives them the perspective and guidance to move forward into the future!
​ 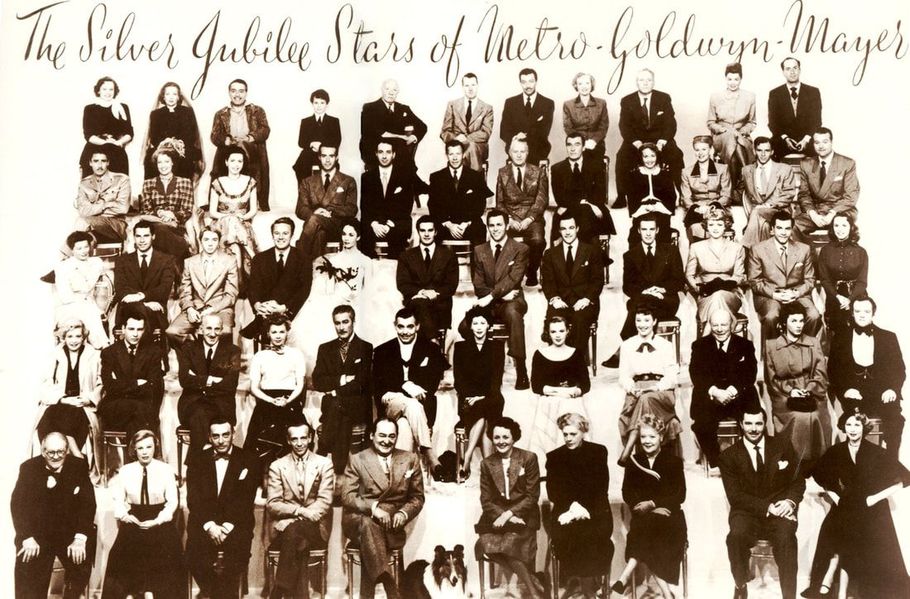